Hello everyone, welcome to the Broken Realms Morathi, the review post This post will regroup all the info and the news on this release 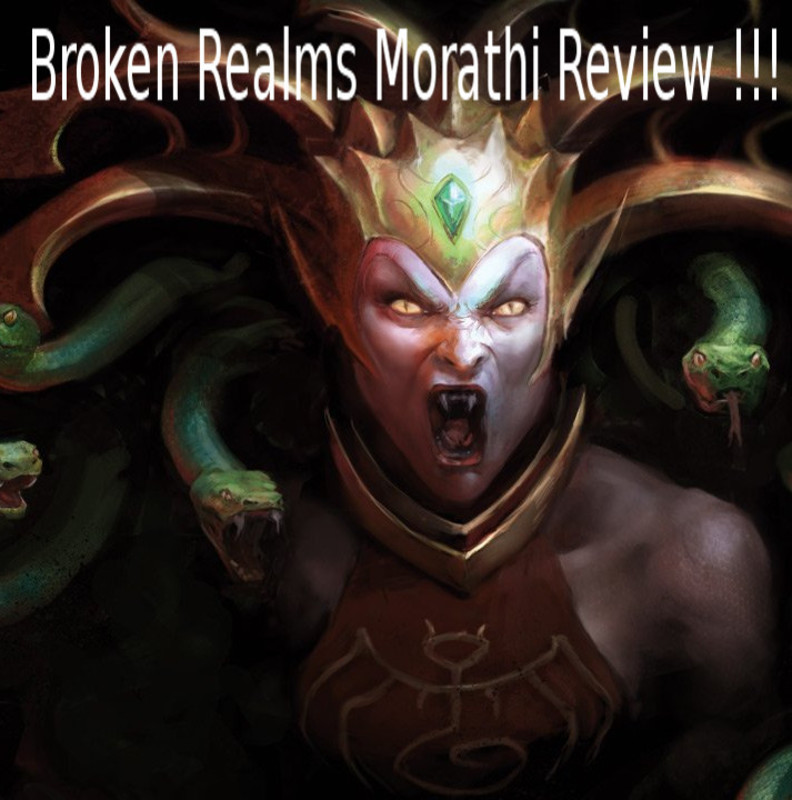 this post is full of spoilers !! if you continue past this point you will learn stories that can't be forgotten! like Eveerrrr!

Also, don't post these on socials media without spoiler tags or something protecting other readers :) thx!

Morathi is the first book of the Broken Realms series. It's a line of supplement that should advance the storyline and update some rules.
It is very close from Psychic Awakening and should lead to the AOS 3rd editions next summer! Don't worry though, Broken Realms Morathi is awesome (nothing like PA ^^)

The story starts with Warcry Catacomb actually, Morathi learned that Archaon found a deposit of Super Rare melted Realm stone: The Varanite. Morathi really wants it and start planning a very cool heist that would fit in Ocean 11. 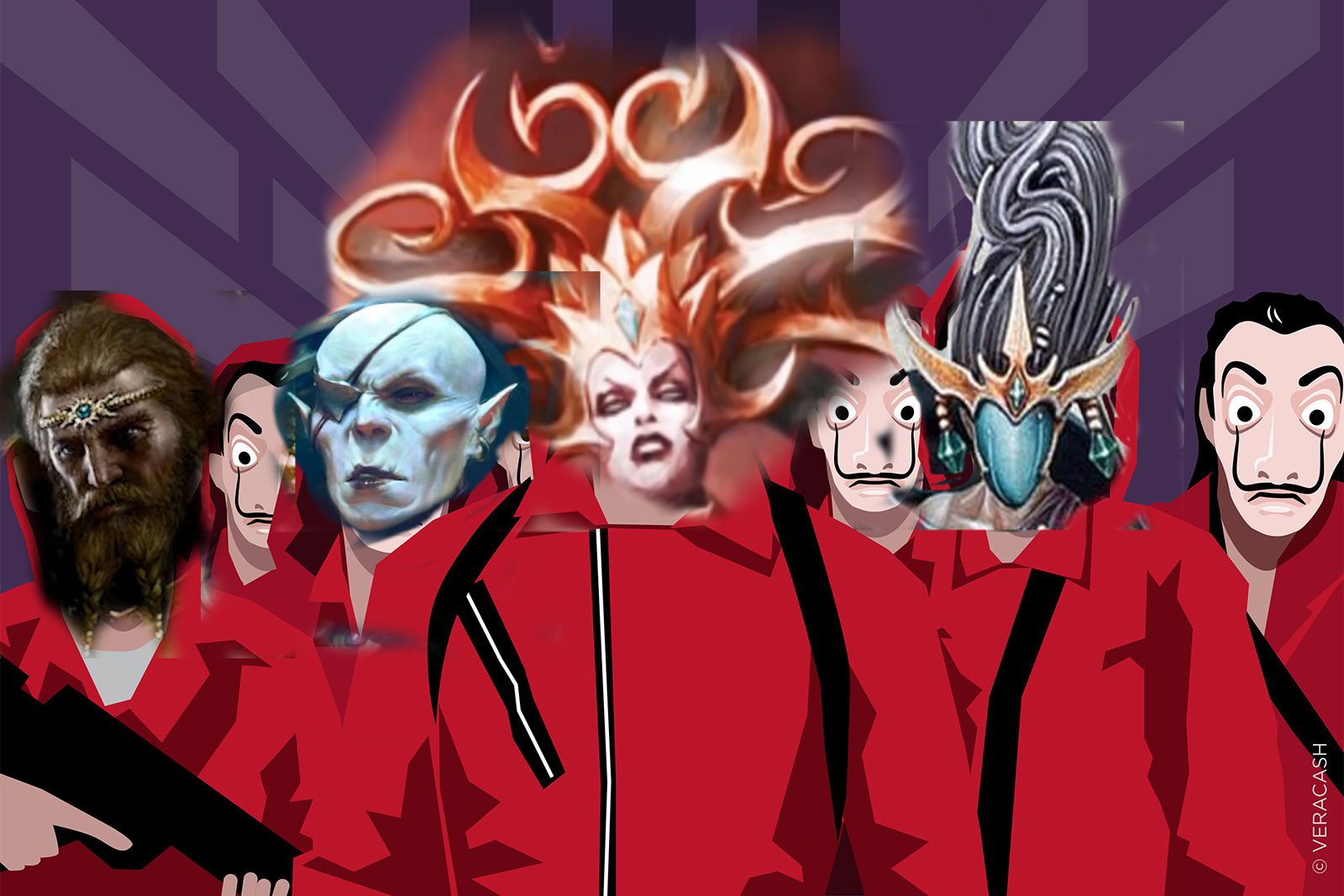 The ShadowStalkers of Morathi (from Warcry Catacombs) are sent into the Varanthax Maw to spy on the Chaos forces! They discover there is a HUGE amount of Varanite and Archaon is corrupting the Meteoric Gate with melted Varanite to invade Azyr!
Morathi knows she can't fight the Eightspoints alone and she really wants the Varanite! She initiates a meeting with Sigmar! While Big S is no fool about Morathi endgame, he still needs her help and information.
She proposes a bold plan, where they would rush in, destroy the Varanite deposit and retreat. Morathi offers to go personally to be sure to destroy the deposit (^^) Sigmar cave in and they muster a big army to Invade The 8 points!

At the same time we also learn this :

When the Cythai (Idoneth) were created by Teclis a long time ago. He used an Artefact named the Ocarian Lantern ! the light of the artefact is so pure that it attracts souls !! Teclis used it to pull their souls out of Slaanesh!
But when the Cythai fleed from Teclis (before getting corrected ^^) they stole the lantern from Teclis vault.
Note: if Teclis have the lantern, Idoneths are doomed. To prevent this they hid the Lantern in a deep chasm in the ocean! Off course Morathi need it and with 3 scores of Shadowstalker protected by Morathi powers they managed to steal it (losing all Shadowstalkers but one)

The force of Orders go in by Alarielle gate (that was sweet-talked by Morathi) Allarielle even used a weaponised waterfall to destroy the chaos fortress guarding the exit!

Lots of fights happen in the 8 Points with a huge force of Fanatics cultists(rules in the book), a Slaanesh seer even joins the fight, following dreams Slaanesh send her! Also, Katakros have a deal with Morathi to attack the other side as well ^^

Morathi goes into the Catacombs with her Elite while the rest of the Stormcasts and DOk fight (and wipe) up there! It's worth noting that Morathi is lying about her Khaine connection to every DOK with legs ^^ So she's walking a fine line!

More fight happens, SC learns the hard way that Chaos have a way to catch Stormcast souls and bind them in Varanite altars!
While reading I realised that knowing they can now die, that makes them a lot more interesting !!

Down there, Morathi succeed and teleport all the Varanite to Hagg Nar in Ulgu (Morathi Base)

But we are far from done !!

Morathi is preparing a mega ritual with a net of towers named: Shadowpath Tower. All those towers are in fact sacrifices altars!
The sacrifices are Chaos prisoner from Nurgle, Khorne and Tzeentch (no Slaanesh) 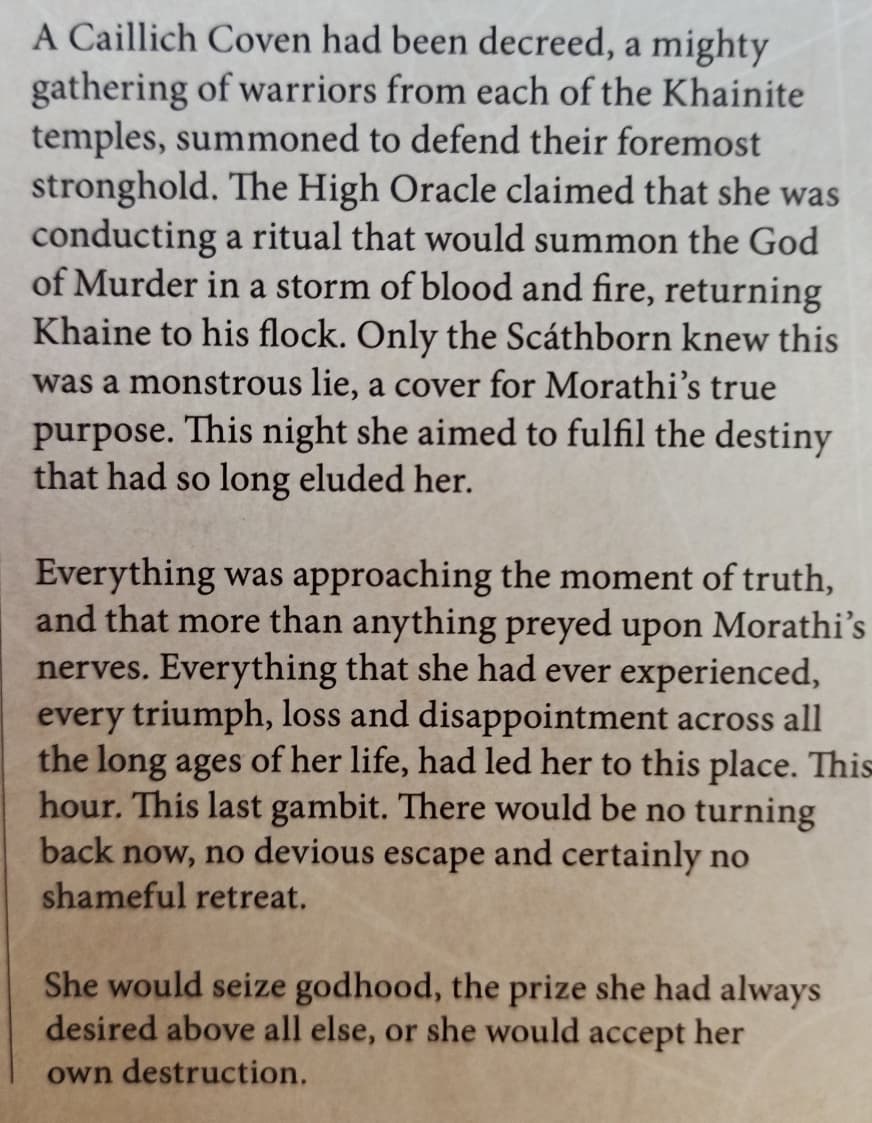 Honestly had the chills reading this!

All the While, King Volturnos muster the Idoneth to take back the lantern! They found DOK weapons on the heist site and are Marching unto Hagg Nar!

Rituel start, Big fight with Idoneth that storm Hagganal Bay near Hagg Nar. The war takes a crazy turn when a band of Slaanesh (the Slaanesh seer from act 1 ) join the fight! These pages were fun to read with Dok and Slaaneesh forgetting all sense of strategy a jumping on each other while Idoneth escapes certain death and attack Morathi Base!

In a nutshell, the ritual is crazy, Morathi has her follower sacrifice bunch of chaos cultist, open a gate from her magic cauldron to Slaanesh belly. Feed him with his brother cultist for vengeance and ... 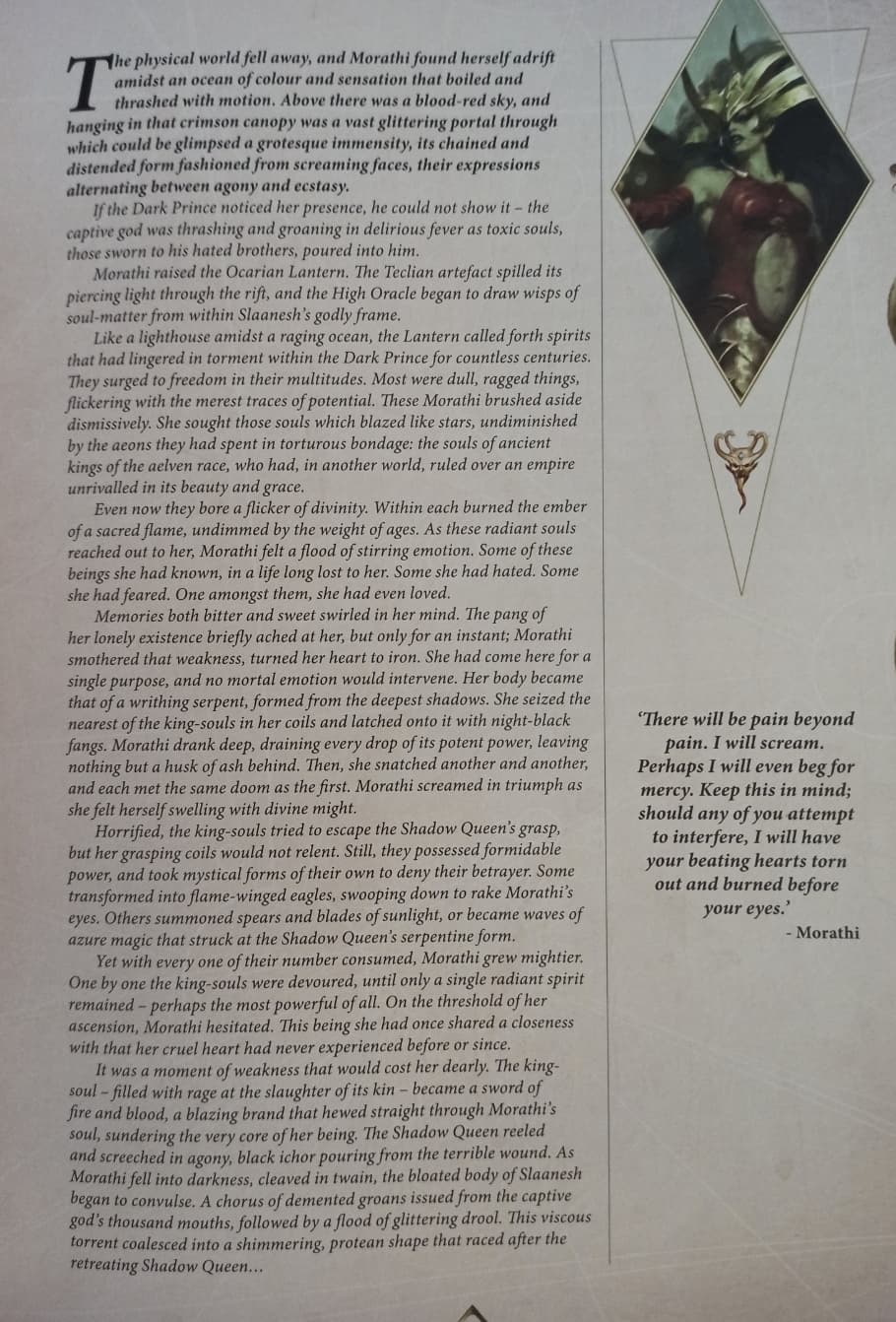 The ritual end with Volturnos breaking the Main Cauldron, Morathi emerge both in human and serpent form! She has now god-like power and wrecks the Idoneth heroes !!

Still, she spares them, return the lantern and add Original Cythai Souls from Slaanesh belly! They are Volturnos friends and they decide to make peace (maybe not peace but they stop the fight)

2 majors stories in this act are :

-Lord Veritant Van Brech while being held prisoner after the coup is freed by an OP shadow with bat wings, probably Melerion 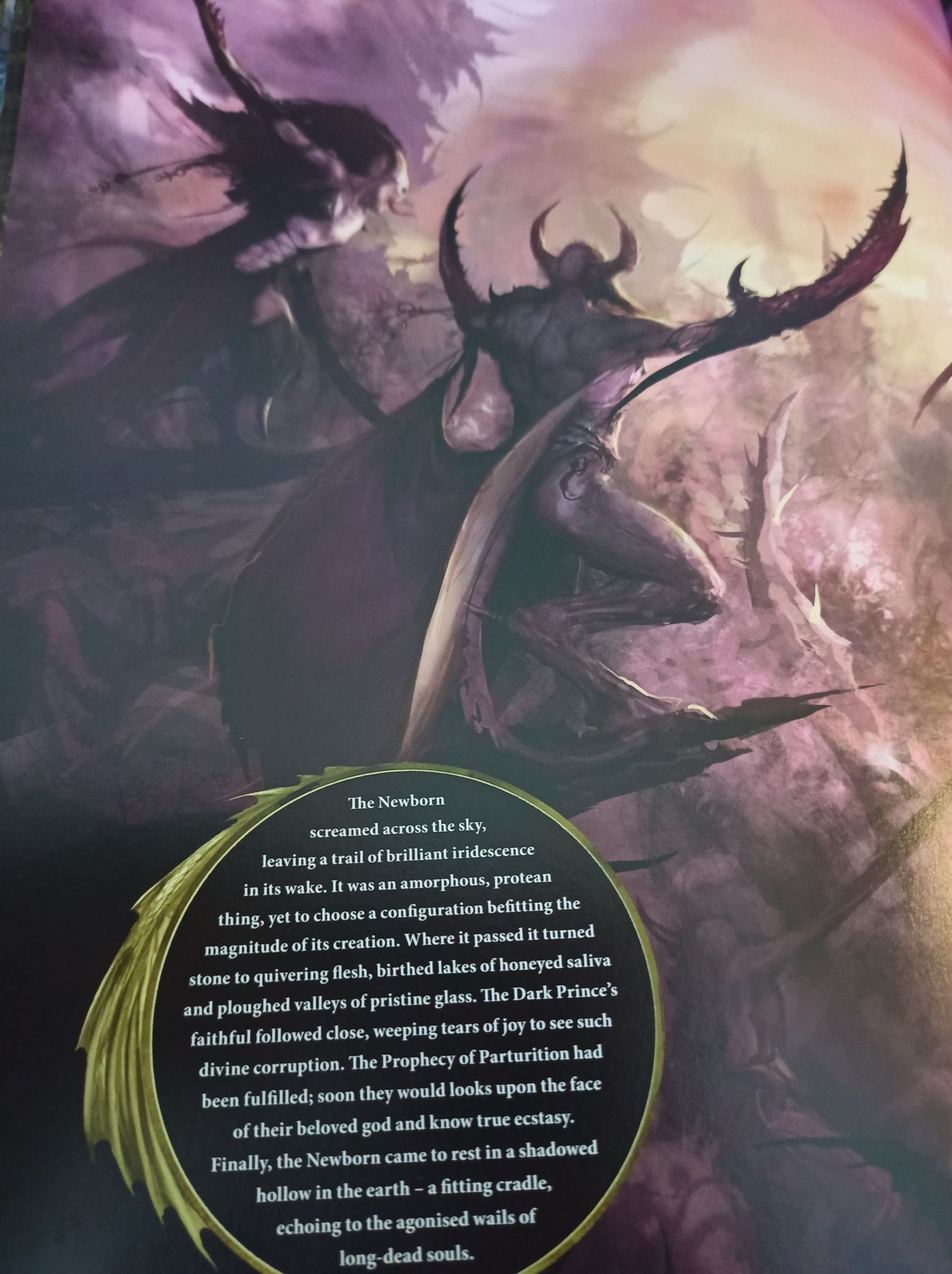 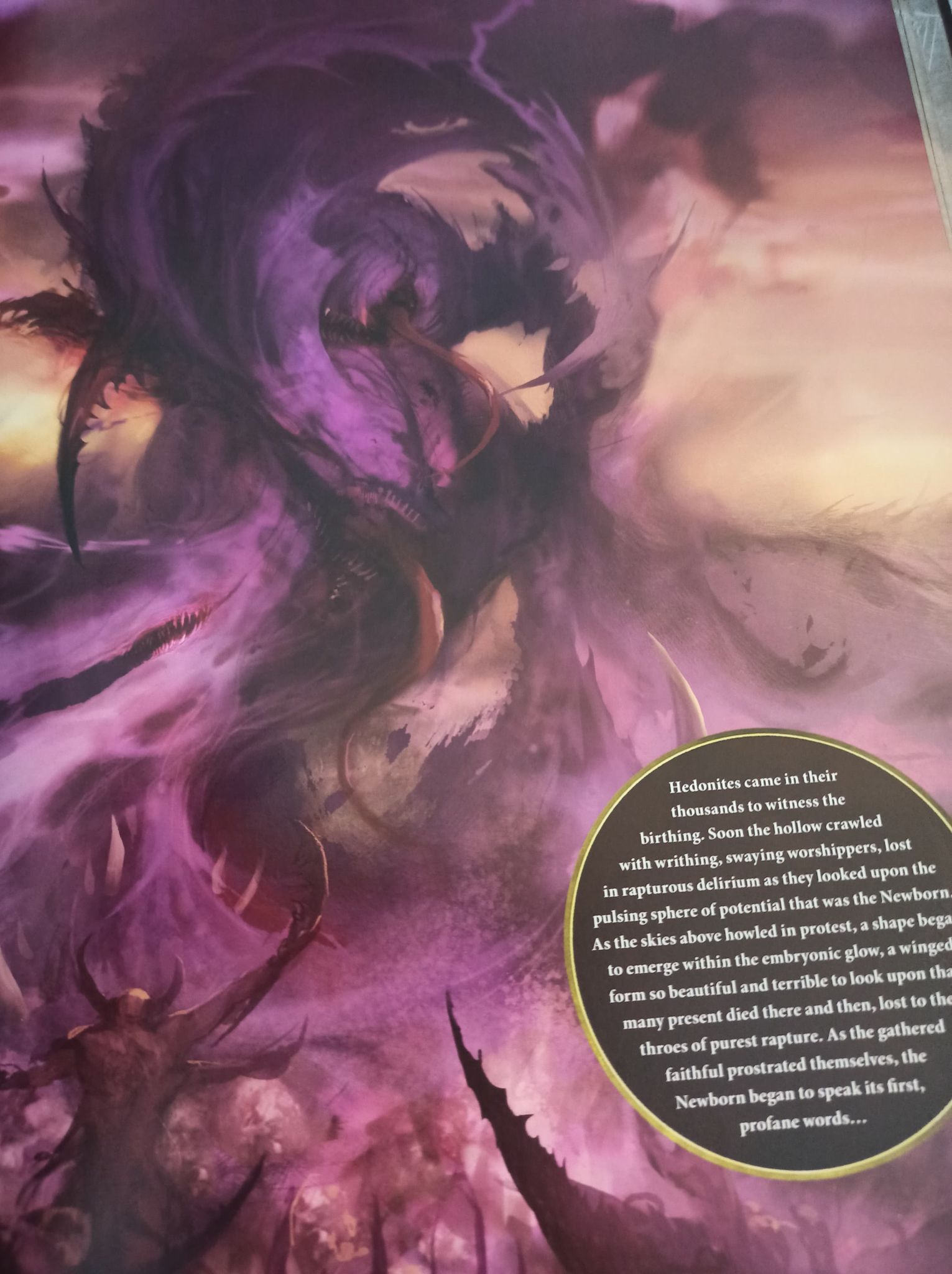 How cool is that !! Slaanesh models soon?

The stories in the book are awesome! Morathi adventure and machination are excellent with stakes, fear of failure and very cool resolution.

Broken Realms: Morathi is a must-read! now I just hope they maintain this Quality of writing for all the series !!

That's it for the fluff!

If you have questions just ask !

Here a quick rundown on what was updated on the gamey side! I'll start with the DOK faction and will update this post and this one as well

Sub faction focusing on the Melusai and Harpies. 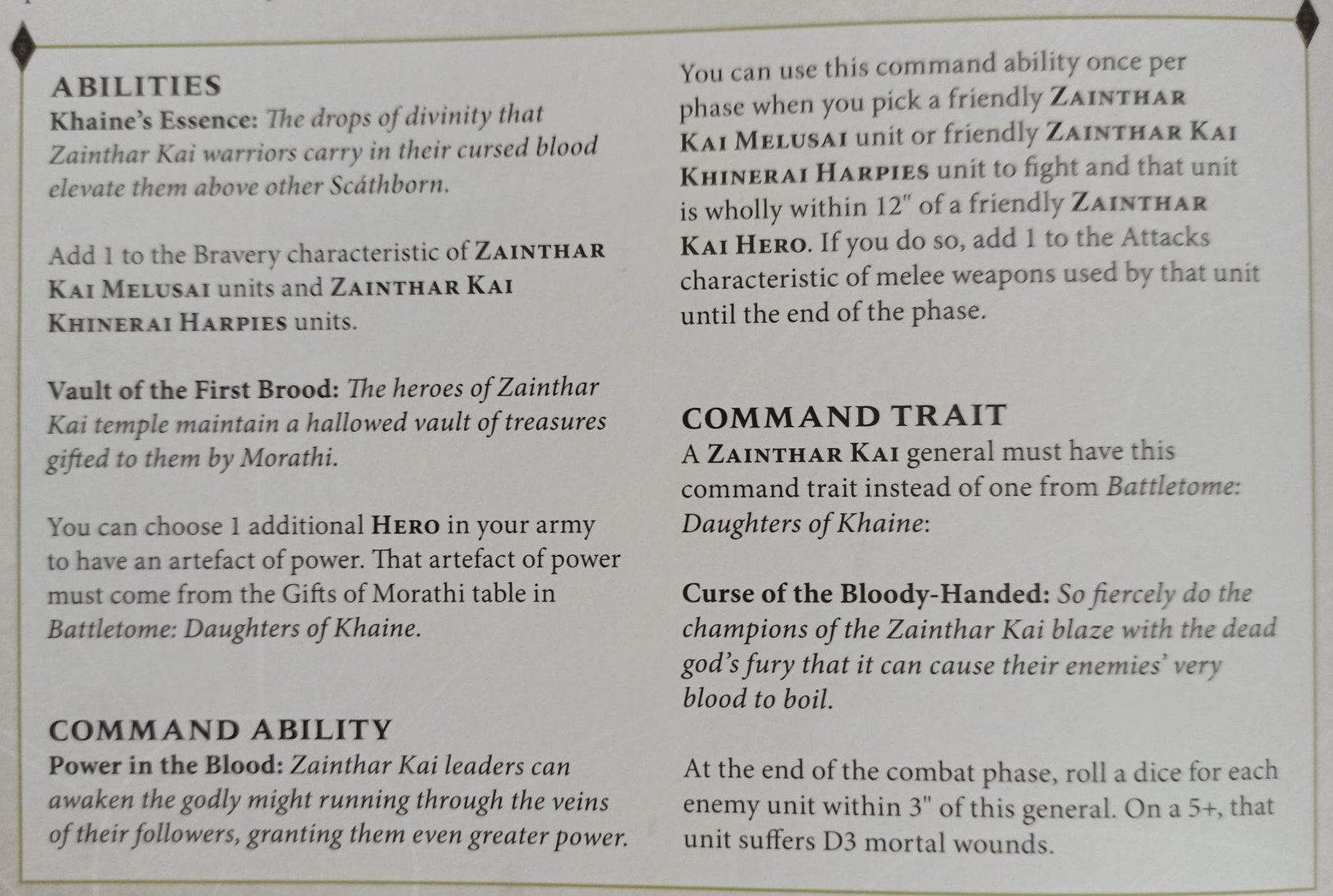 Rules are neat, command trait is super weak sauce though :(

140pts: Vyperic guard allow one free command ability per battle. (it's like buying 2 command points and 40 pts for the extra relic)

120pts: SacthCoven, no battleshock test for units part of it.

nothing extraordinary but the Vyperic include Morathi in the Battalion so maybe there is something to do! 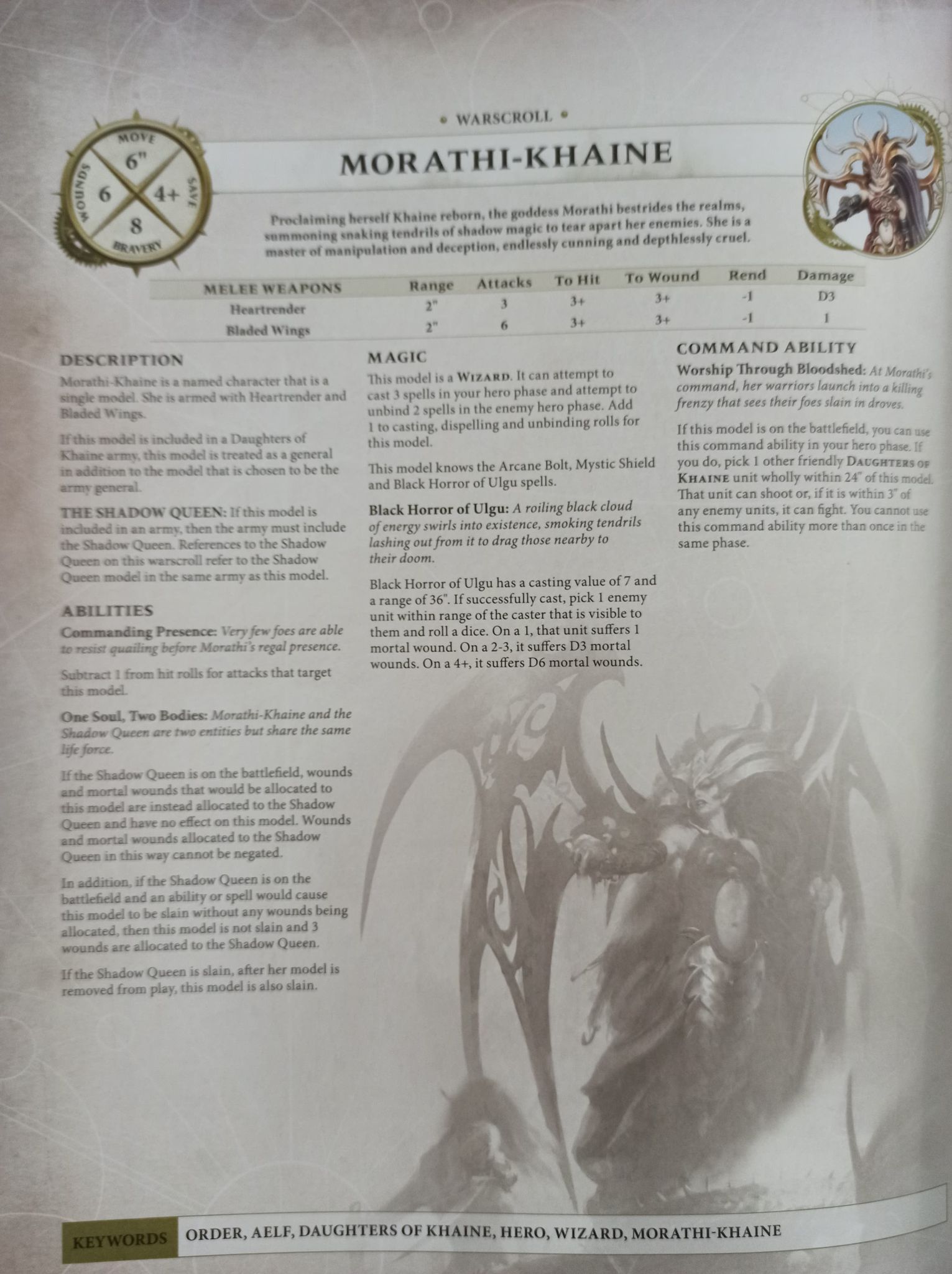 -Nerf as only one unit is affected by Worship through Bloodshed. but range 24" wholly within now
-lost double spell range
-can use her command ability on the Shadow Queen now! 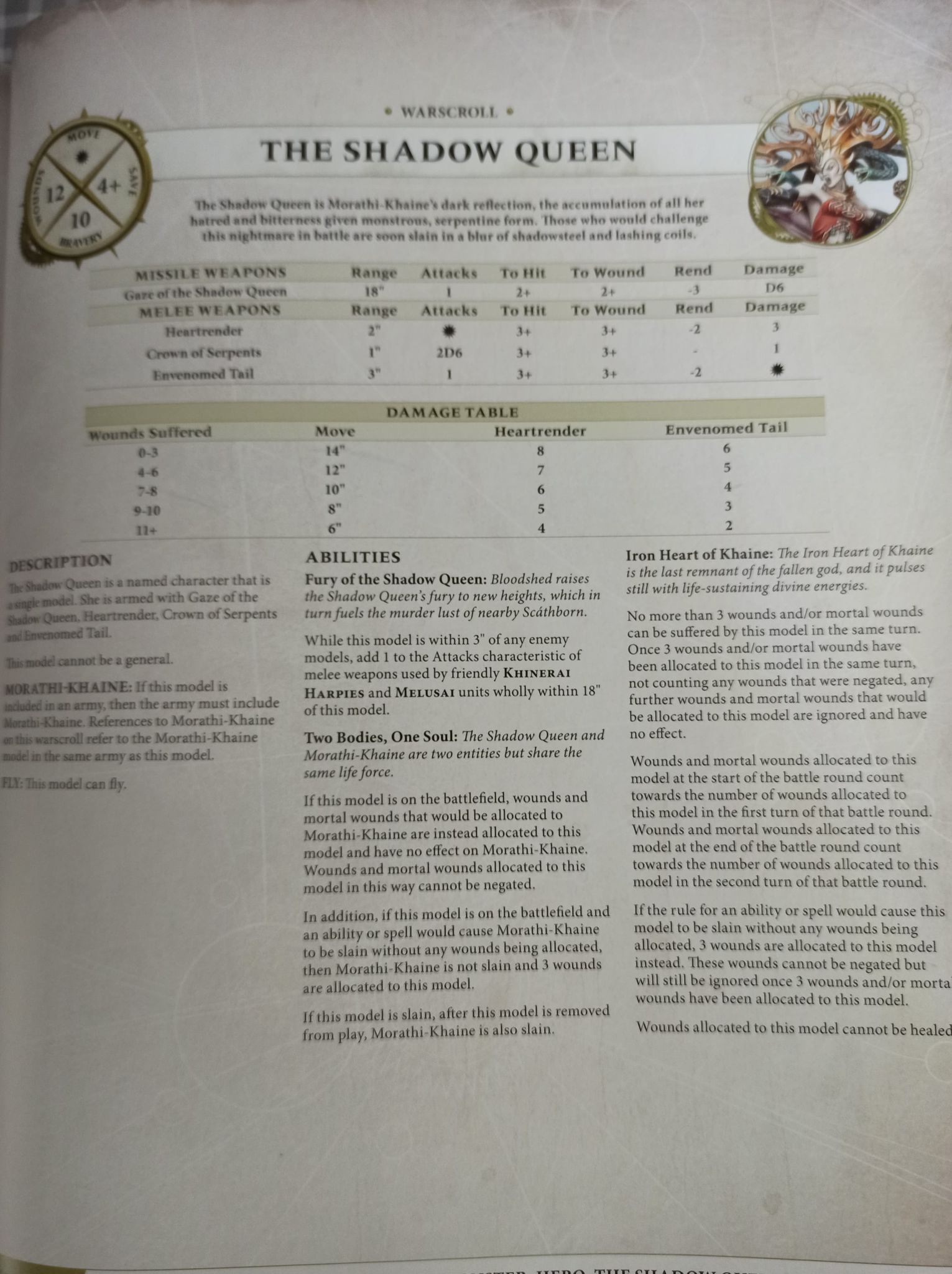 The human form was nerfed a bit but the Serpent is a BEAST! only 3 dmg for the pair per turn is really really strong !!

That's it for the DOK update!

Will do Idoneth next. 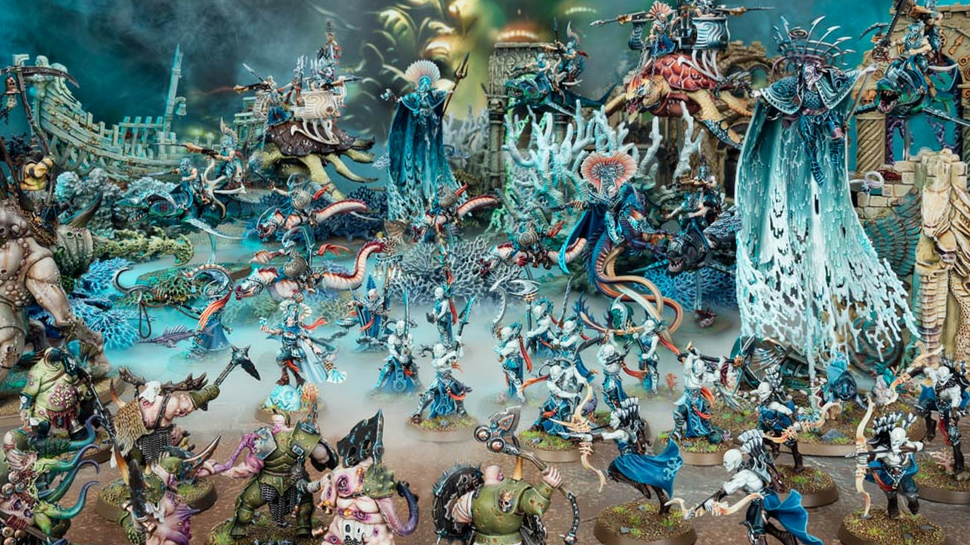 Idoneth faction had lots of changes. It's really going to transform the faction!
If you consider the ranged meta, they could be the next big thing!

Both Deepare and Leviadon can have mounts traits now. Some interesting choice here with Leviadon ignoring rend -1, increasing the void bubble to 15".
Deepmare gets nice options too with a -1 to hit to enemies within 3" or +1 to the Deepmare attacks.

The unit was bad, it was such a shame as the model was so nice! 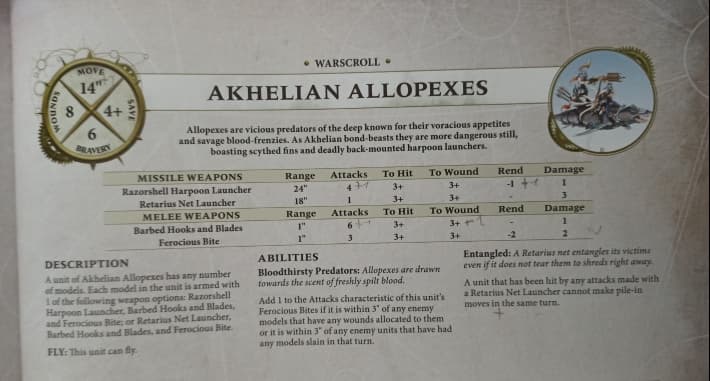 Everything was improved: +2move, +1 shot and +1 rend on the harpoon, Net launcher prevent pile in On hit! (holy shit) .
Melee attacks got changed as well: +1 attacks for riders and +1 to wounds. Shark lost fin attacks but now attack 3 times with the Bite with -1d thought. Also, Blood predator is now +1 bite attack! 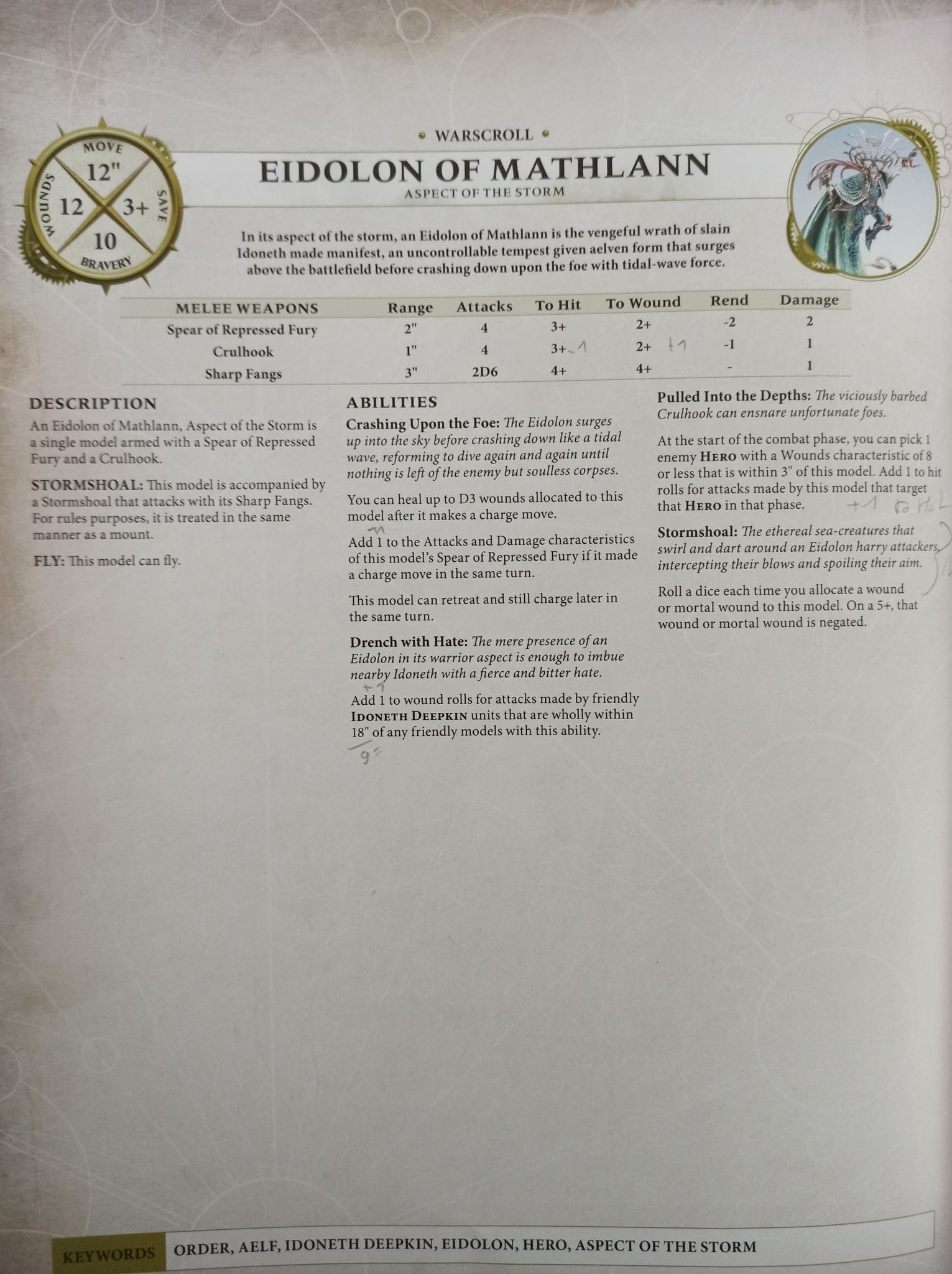 Huge change here as well
Crashing Upon is now: +1attack and dmg on the spear and heal 1d3, can retreat and charge.
Drench is now +1 to wounds bubble wholly within 18"
Gain FNP 5+ (HOHOHO)
Pulled is now +1 to hit against a small hero. 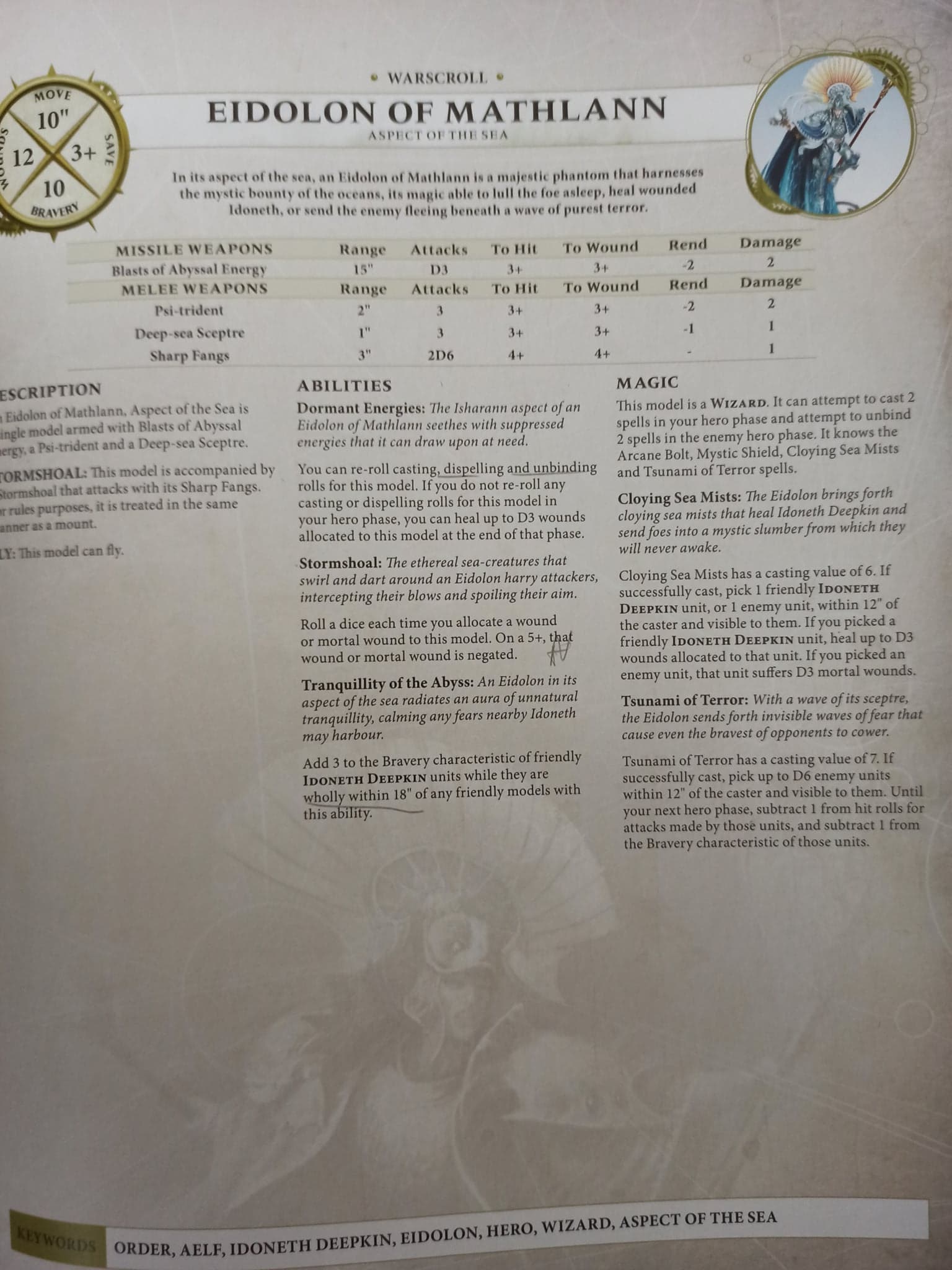 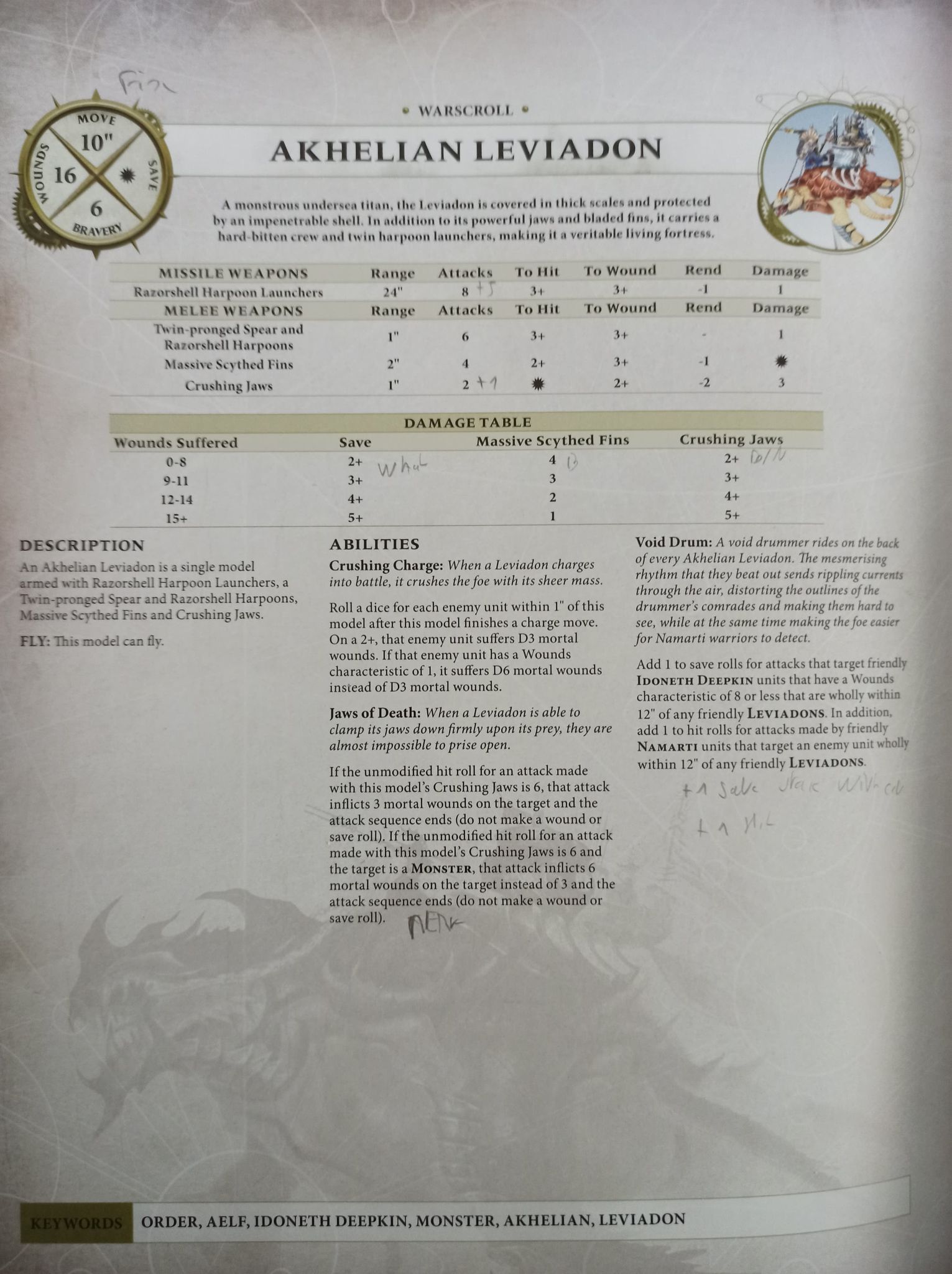 The move is a constant now.
+5attacks on the Harpoon (and +1 rend)
Jaws is now 2 attacks and dmg 3
Save is now based on the table (start a 2+)
Fin dmg reduction is now linear but starts at 4
Dmg table have the first tier at 0-8 wounds
Aura is now+1 sv and +1 hit(conditions applies)
Gained Crushing Charge
Jaws of death halved vs non-monster :(
Rider melee merged into one line.

lots of changes, very good meta pick, with a 2+ save and the trait to ignore -1 rend he is going to ignore most of the ranged attacks ^^
(Ballista are still a problem ^^)

Also, the Aura is a lot stronger now.

Hmm, it's actually very good and you can protect your King from being sniped.